Unhinged Episode #011: Inside the Criminal Mind 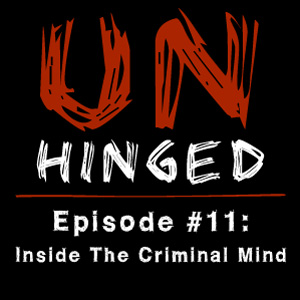 We all love to fear monsters. In Hollywood, that thrill brings in millions. But what about when those monsters are real people who feel no remorse for their criminal behaviors, including murder? In this episode of Unhinged, we dig into what makes serial killers, from environmental factors to neurology. Can a serial killer be created in childhood? Can they be rehabilitated?

We also talk about the similarities and differences between sociopaths and psychopaths. There’s a fine line between the two, but there is a critical difference. You’ll also learn a bit about what drove people like Ted Bundy, Edward Gein, Joel Rifkin, and Charles Manson.
The scariest part of the show is seeing how Doug had a similar childhood experience to one of the above serial killers, yet he has not turned out the same way. We discuss why that may be.

And lastly, we talk about why we like watching movies about killers, disasters, and horror. Do we each go into it in the same frame of mind?