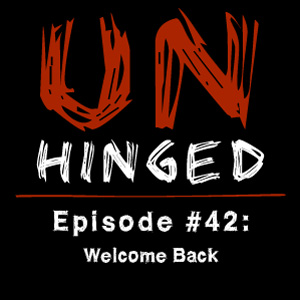 After nearly 5 months, Unhinged is back! We took an extended hiatus due to various reasons, the most important being Doug’s terrible relapse. Over these past few months, Doug has been suffering greatly, but now there seems to be a spark of relief as his DBS starts working again. This all started after his surgery to replace the batteries in his DBS unit, which is apparently very sensitive. The surgery requires the device to be switched off, and when it came back on, it was no longer working the same way it was before. It took several months and lots of trial and error to get it to come back to life, but now there seems to be some hope.

During this time, Ed has also had a major life change by moving from California, where he’s been for the last 21 years, to Colorado, where a new adventure begins. The contrast between his positive life change and Doug’s hellish suffering is stark, but the friendship remains strong.

In this episode, we discuss all these changes and how Doug is coping now. It’s our “welcome back” show, so we’re still ironing out some technical issues, but we’re glad to be back!